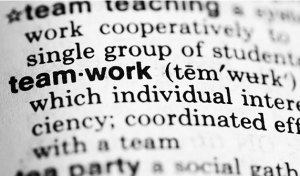 To me, the word TEAM stands for ‘Together Everyone Achieves More’. And it’s true.  When the values and actions of many align with the vision of the whole, just about anything becomes possible. Add love, humility and a servant’s heart to the team and everyone benefits.

Yesterday I had the privilege of having lunch with someone who leads with love. Someone who believes that his company’s ongoing success, despite a difficult economy, is the result of taking care of his people – creating a transparent environment of trust where people are empowered to lead and live up to their fullest potential; an environment where balancing the demands of work with time for family and self-care creates sustainable high performance instead of pushing people to the point of burnout.  His vision, values, and commitment to TEAM are clear and the results speak for themselves.

I saw a different, albeit equally impressive example of TEAM last week in China. I was there as part of a delegation formed to share best practices in clean energy innovation in sustainable urban planning. Our team visited several communities and met with various Chinese urban planning officials, policy makers and clean tech companies working together on an unfathomable scale to address the environmental impact of mass urbanization. We were collectively awed by the possibilities of what clear vision, effective teamwork and strong leadership can produce. Equally impressive was their willingness to seek advice and input from others, recognizing that there is much to learn from each other.

In sharp contrast, these last few weeks I have also bore witness to two separate, yet equally exhausting examples of an alternative, less savory version of the acronym TEAM. I have watched tremendous initiative, effort and vision of what’s possible get buried under an avalanche of noise manifesting as territorial behavior, rooted in ego, pride and fear. I have watched helplessly as people, organizations and ideas have become polarized – stalemate and inertia setting in, attempting to take root in ever-shifting sands. Sadly, I have watched as the acronym TEAM morphed into a different meaning altogether: Territorialism Eventually Annihilates Motivation.

So I wonder to myself and I’m curious to ask…

How do we lead with love, love our teams, and continue to build bridges in the face of resistance? How, as leaders, do we build foundations of trust and transparency when others would rather play politics? How do we stay motivated and inspire others to align to a common goal? How do we teach and model the true meaning of TEAM – that together, we really can achieve more than any of us can do alone?

Love what you just read? Please be sociable and share with others!

No part of this blog may be used without the express written permission of the owner. For usage information contact the owner at: sharon@heartbydesign.com.